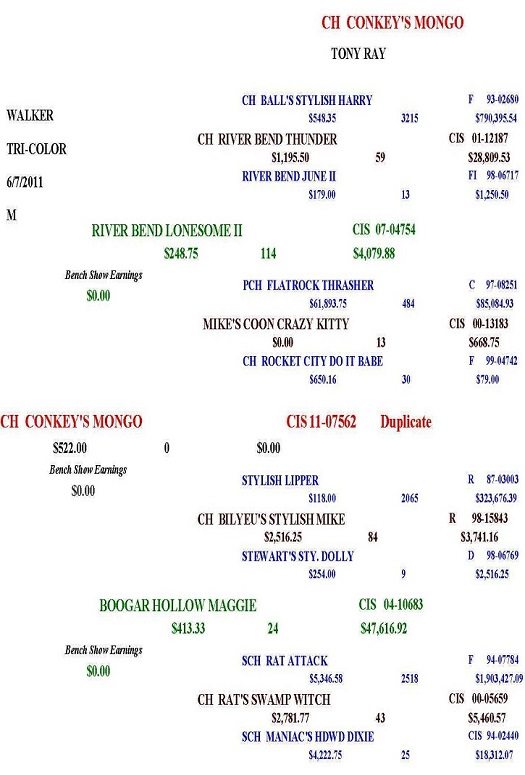 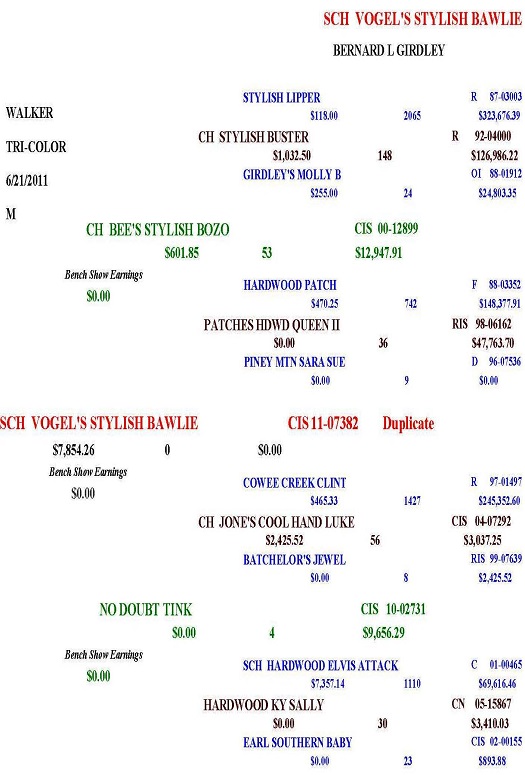 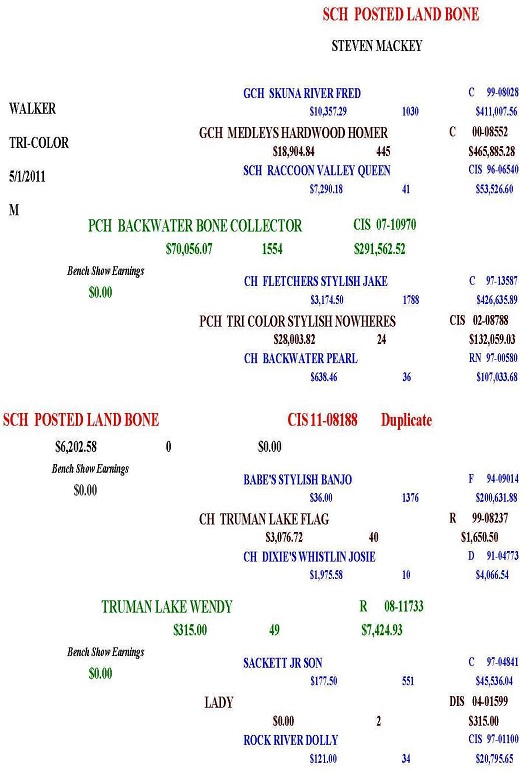 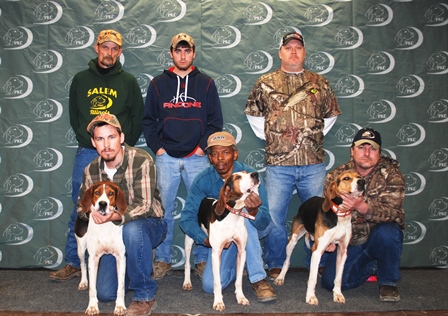 Cast is on the way to the woods and should be ready to cast the dogs about 8:20. Go get a few finger snacks and a cup of hot chocolate and get ready for actions.

Mongo had bad luck on his strike and is minus 100

Mongo is active, found the trail of another critter and is struck again for 100.

Bone struck something good, he is treed for 100

Cast is beginning to get pretty close, tree is dead and they will be scoring it shortly

Bone is worring Jeff a little, pretty close and he is two minute treeing. May have a vine in his teeth.

Just arrived at the tree and leashed him up.

Zack says things are not looking real good for Bone.

Still no report from Bawlie

Bawlie reports in for 50, a long walk from where the cast is.

Bad news for the Bone, minus both ways

Mongo is yelling for the cast to come and look as what he's got, and he is way back close to where he first struck. Treed for 100..

Bone has walked his minute and now has been recut.

Still a walkin to Mongo and he is down solid, Bone strikes soon after release for 25 and did not go very far and found another tree, treed again for 100. Bawlie has gotten a little quiet.

Judge and cast going to score Mongo; Jeff and my radio man gonna baby sit Bone until the judge gets back. May be a while before we hear about Mongo's tree.

Bawlie must have been called treed for 100 after the cast left. They see the lights coming and think they may have scored Bawlie out of order. He says they did not shine either tree very long, so maybe there is some good news coming.

Well; things are finally picking up, all three dogs were split treed and all three had the evidence.

Scores with around thirty minutes left is:

Dogs are recast with 32 minutes left and Mongo brings a strike for 100.

Stallard is shuffling his feet a lot and has his lips puckered up for a quick call. Ole Bone needs to hurry up.

Bone gets struck for 75, followed pretty quick by Bawlie for 50. Sounds like Bawlie may have struck on the side of a tree. Slug is the one shuffling his feet and figetting. Stationary is on Bawlie.

Mongo is treed for 50 and minused 50, sure sounded like the right dog?


Cast walking toward the Bawlie

Bone is treed for 25 but it sounds a little like there may a difference of opinion. They very well could be on seperate tree.

Walking the minute to recast and going to Bone.

The Bone also had a coon, plus him another 175

Bawlie is still looking, Bone is struck back in for 25 and sounds like he is treeing, Slug is not paying much attention. About 5 more minutes left and even if Bone trees another coon, the best he can do is 250.

Mongo is called treed but minused for moving pretty quick.

Cast is over and the final scores are as follows:

Thanks to the handlers, Judges, Guide and Radio Man for a very good job.
Please prepare yourself and your hound. Hunt the dog, read the Blue Book, and your Good Book!
[email protected] @ 812.212.1619
Top
Locked
1 post • Page 1 of 1