The final four hounds and handlers are shown below, left to right, with judges, panel members, Purina's Larry Walters and SportDOG's Darrell Douglas. 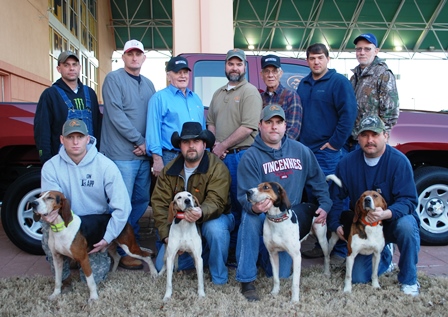 The photos have been completed and the Final Four bunch are preparing their hunting gear. They should be loaded up and headed to the woods shortly.
---
The cast has left the Isle of Capri and will be cutting the dogs loose in just a few short minutes.
---
The cast has arrived at the hunting spot. The dogs are unloaded and being collared up. James Love and David Dial are providing tips and encouagement to all handlers.
---
The dogs have been relased 7:14 PM CST
---
Jason Crum put Tapp on the paper first for 100 after the minute.
---
Tiny is struck for 75
---
Tiny treed for 100
---
Red is struck for 50 with a line
---
This MS Delta hunting area is some of the best in the country. Early round casts last night scored on 63 raccoons and the four late round casts scored on 12.
---
Plus Tiny up for 175+. She's almost ten years old, but quicky takes the lead
---
Strike Buddy for 25 and tree him for 100, Tapp covers for 75.
---
It's a clear 53 degrees here in Lula with a mild south to southeast wind at 9 mph with 67% humidity. The moon should be shining bright about 9:00 pm
---
Plus Buddy 125 and Tapp for 175. Red came in late and sucked up 50-. Love and Dial are haveing a coon finding contest, as of now they are tied with one each.
---
The stationary rule is running on Tiny
---
Tiny is treed again for 100
---
Strike both Tapp and Buddy back in for a quarter with a line
---
Buddy is treed for a quarter with Tiny
---
Tiny and Buddy were up a big oak with lots of vines and nests. With all the years behind Love and Dial, even they could not find this one. Circle up Tiny & Buddy
---
Tapp is declared treed for 100 back in the same general area as he was before. Tiny is struck back in for a quarter with a line
---
Short delay in reporting. Durham walked into a tree and dropped his phone in the mud. Love had to put on his reading glasses to help him find it.
---
Tapp and Tiny were handled on Tapp's previously scored tree and have their points deleted.
---
The two are recast to a fresh set of strike points. This is how the score stands with a little over 50 minutes used.