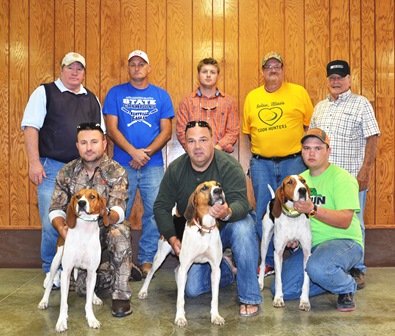 Cast on the way to the woods, should be ready to cast in about 30 minutes.

Just turned on a dirt road, won't be long!!

Collared up and cast at 8:20, from a corn field. It is a beautiful night in So. Ill and we should have a good coon hunt.

One minute up and all is quite, (no babblers tonight).

Mosquitoe with a bad motor buzzing the judges ear, but no dog yet.

Black strikes in for 75 and Money for 50. Some discussion about someone striking the wrong dog.

Black is minused 75 and Money moved up to 75 strike.

Black struck back in for 50 and is working a track to the right of the treed dogs.

Cast on the way to tree, Black is treed seperate for 100. Radio man is on the way with Mark to Black's tree.

Flo and Money had the evidence and they are plussed up. Flo has 200+ and Money 150+ and we are on the way to score the Black.

Mark says that he hunted the same woods last night and Black treed a coon that was found in this same tree, sure hopin he is there again.

Looking hard, but no joy so far.

Nothing but circles, walking the minute.

Got a good track, Ricky better do something quick.

The Money dropped anchor and is treed for 100, Black and Flo went on after the big coon.

Money got to enjoying the race and got a little weak on the tree, two minutes, but its broke.

Money is still two minute treeing and the handler is shuffling his feet a lot. Four minutes up and clock running slow.

Tree is dead and the money is handled, and Kevin is breathing again.

Cable is going to need a new squaller after this tree, reeds are shot.

Kevin is satisfied and we are walking the minute.

Minute up and 6 a working.

Flo opens and Money is cast.

Flo is lefthanded and Black is deep straight ahead. 1:17 left.

Flo is tree barking but Billy has got a far away look in his eye, judge starts the stationary.

Guide's phone is ringing off the hook, it's supposed to be a smart phone and should know he is busy.

Third tree is dead and cast is on the way.

Cast is walking away from Flo, and Billy still has her on "ignore".

Money tree is dead and he is handled.

Shining the tree, Black is still deep but no report.

He is back in hearing and sounds like he may be looking up a little.

Circle Money up again and we are walking the minute.

Black is treed for 100 and is two minute treeing. Guess him and Mark both have a big "sweat rag" in their hands. Third tree dead and the cast is humping in that direction.

Flo is still barking her head off, but Billy does not have to tree as long as they are going to trees.

Black's tree is dead, cast arrives and he is handled.

Minute is up and Black is cast, stationary is back on the Flo.

Black is struck for 25 and it sounds like Mark forgot to tell him the coon was there, he may have gone back to check it out. Black is treed again for 100.

He is about to wear out the two-minute watch.

Money is struck for 25 after the tree was called.

Black did go back for a double check and the tree was deleted.

Just to make sure the cast gets plenty of exercise, Flo is deep in one direction and MoneFy is deep in the opposite direction, cast is on the way to Money. My radio man is going with Billy to Fl, so it may be a while before we knoow about Money's tree. If Black does not come up with another tree, this may kill the cast.

Flo is handled and waiting for the judge and rest of the cast.

Judge and cast members arrive at Flo's tree, Money was minused for moving. Now he is re-treed.

Strike Black for 25. Shining the tree for Flo.

Billy pulled out a cross cut saw and cut him a club and wore a tree out, but could not produce any eyes, Flo draws 175 circle.

Cast walked the minute and cast Flo and is on the way to Money.

Money is treed solid but he is a long walk through the country. Flo is struck for 25 back behind in the same neighborhood where she just treed.

Black is also barking treed, but Mark has him "on ignore" for the time being. Still a good walk to Money and we have 16 minutes left.

Mark is afraid that there is a possibility that he may be on the same tree again.

But the party is not over yet.

Still a walking to Money, already crossed two pretty good farms and still not there,

Money handled with 3:45 left in the hunt.

Circle up the tree for Money and we have a winner:

Big Money is third place with 50+

GOOD HUNT AND CONGRATULATIONS TO ALL.