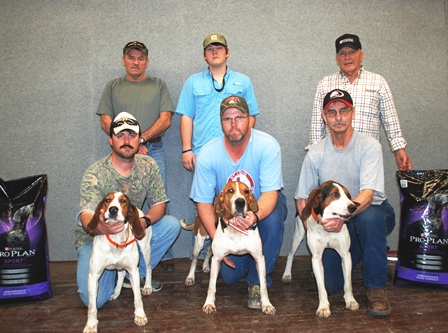 Cast should be ready to start in a few minutes, please stand by:


Will be casting dogs in less than five minutes.

Cast is walking in a ways before cutting.

COONER is handled at his tree.

Evidence is hard to find and the COONER is circled, walking the minute and COONER is recast.

Not a lot of action, ROSE AND STORM are just bumping their nose on the ground and the COONER has not been heard from any more.

ROSE & STORM are still flirting with the six, but keeping it open, COONER looking elswhere.

Dogs are beginning to move a little deeper, cast is going to tighten up.

STORM is barking a lot in the same place and the stationary is working.

STORM treed for 50, may or may not be together.

COONER is handled and STORM is minus 50.

Not a good time to tree, COONER is minus both ways.

STORM - changed his mind and is minus 100 more.

COONER - struck back in for 25

Dogs cannot seem to get much done, six minute trailing and nothing much happening.

Been hunting about 45 minutes.

Been hunting 55 minutes and not much happening. Dogs still just bumping around and cannot come up with the coon.

Action picking up; STORM gets treed for 100 and makes it sound so good that ROSE wants part of it and she is treed for 75.

STORM & ROSE handled at tree, we are looking for the coon.

Nice tree, no coon eyesk dogs earned circle. Walking the minute and will put the six on COONER

STORM AND ROSE struck back in and still not getting much done. Cast is debating about trading dogs.

ROSE is minus 25 for coming in to the cast to check the scorecard. Fifteen minute rule applied and she is now gone to try a little harder. Fifteen is broke and she is struck back in for another 25

Six a working again. (this must be last nights tracks they are working with)

Thirty minutes left in the cast.

The COONER has found another tree and is called for 100, cast is headed that way.

Steve Yant is doing a little celebration dance, the COONER had the coon and is plus 125 bringing him to even with the board and leading the cast.

The STROM has also found a tree and is called for 100.

ROSE wants in on the action too and is called treed for 75.

Don't know if COONER got off the leash or not.

Nothing produced and tree is minused, dogs are recast with around five minutes.

CAST IS OVER AND PRESENT SCORES STAND.