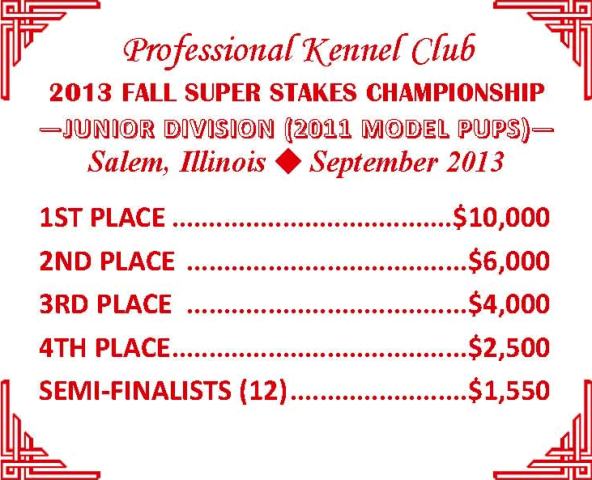 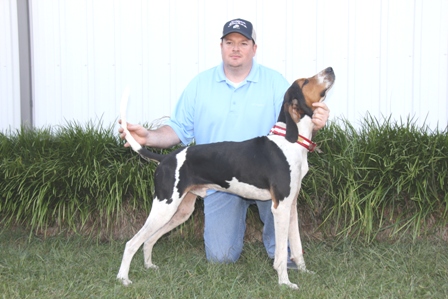 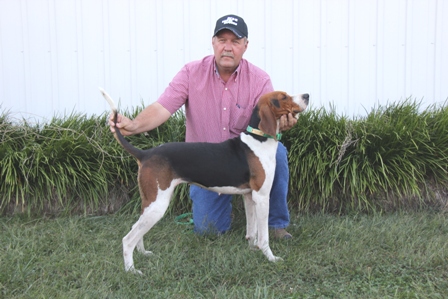 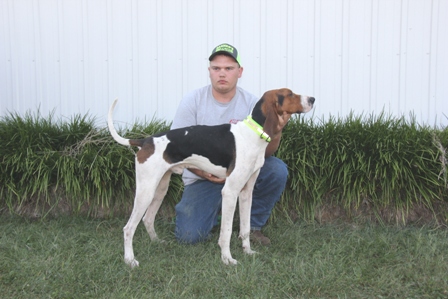 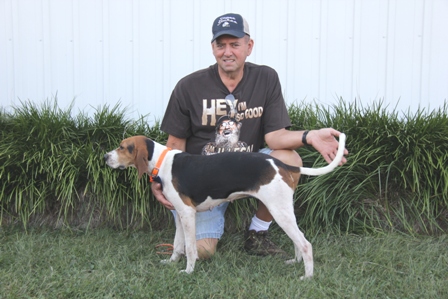 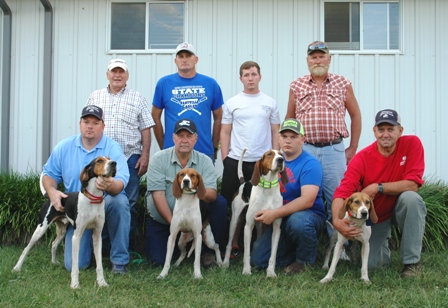 Play by play will start about 8:00 pm
Cast has met up and are in the trucks headed to the woods, should have some action in half hour or so.

Cast is pulling into the honey spot, looks like a nice bottom with lots of hardwood. Judge is giving final insgtructions before turn-loose..
Handlers colloring up dogs and setting the Garmins.
Dogs are cut at 7:46, good luck to all.

Getting them struck, run coon run: Hanna struck for 100; Flo for 75 and Homer for 50.
Not the best of tracks, judge is already working the six minute watch.
Dogs are beginning to get deeper and cast is moving up. Beautiful place to hunt, good hardwood and easy walking so far.

Hanna treed for 100, not real excited and not treeing real hard. Second and
third tree are dead.
Five is up and they are headed to tree. Judge still having to run the two now and then.
Hanna is handled on the tree.

Benny is satisfied, circle Hanna up and they are off to see if they can hear the other dogs.
Big money still has not voiced his opinion.
Six is broke and Hanna is cast to the other dogs and they are deep. Still no strike from the Big Money.
Homer came in to cast to check on his score and found out the he was minus his 50 strike. Flow treed deep for 100. Fifteen is working on the Homer.
Homer is in the dark with the five working.
Guide reports that the woods is real dry and the game is not moving very good. I saw the same dog work last night, dogs working a sow and a litter of kittens. Dogs did not look good.
Cast is now in rolling hills and they are closing in on Flo and she is sounding pretty good.
The Flo is handled and cast is shining the tree.
Hey! Hey! Hey! Plus up the Flo, she had the evidence and did a nice job. Homer struck back in for 25 and Flo also strikes back in for 25.
Flo is working up a good track and Hanna is building a fire under something the opposite direction. Stationary is working on Hanna.
Big Ben pulls the trigger and trees the Hanna for 100.
Big Money is still MIA.
Cast is in "fast step" headed for the Hanna and she sounds a lot better on this tree. Tree is dead and Hanna is handled.
They could not find the plus points and the Hanna is circled up again. Walking the one minute.
Six working on Homer and Flo.
About 55 minutes left in cast.

Six minute caught Flo and Homer for 25 minus each.
Hanna struck for 100 and Homer struck for 50, six a running.
Six broke and they are working a pretty good track.

Finally heard from the Big Money, he is struck for 50 and cast is walking that way.
Flo is struck back in for 25. All three of the other dogs are deep and going in different directions.
Homer treed for 100 through the country a ways.
Around 30 minutes left in the cast. Walking thru a cut corn field looking for Homer.
Gonna need some "long distance power walkers" to go to Homer, he is in the next county.

Cast still walking but they are getting closer.

Handled Homer and immediately plussed him up moving him to second place.
Cast is walking back toward where they last heard the other dogs, but only have 10 minutes to get within hearing.
Still walking with five minutes left but still cannot hear a dog.

Only two minutes left and still cannot hear any dogs.

Cast is finished, may take a while to round up the dogs and find the truck.

Junior Champion is" Cash Flo with 150+
Second is Backwater Homer with 100+
Third is Stylish Hanna with 325 circle
Fourth is Big Money, 50 strike and no tree.