Giving credit to the originators, innovators, implementers, workhorses and the backbone of what the Professional Kennel Club is today.

PKC has provided the coonhound world with some of its most exciting moments since 1975. That is a record of over forty years that PKC has been involved in producing outstanding coonhound events. Whether you are considering dogs or handlers we can look back and recognize many who became a “hero” of the sport and they owe most of the recognition they received to what they accomplished with PKC.

A couple of hounds that I remember from the early days that absolutely made their mark on our sport were “Spring Creek Rock and House’s Lipper”. If you are old enough to remember, you know that PKC had a great deal of influence in bringing the world’s attention to these hounds. Mike Boone and Duane Clark was a steady fixture in the winner’s circle as well as Tom Hopkins and Ole Lipper. When you begin to think about them there are a large number of our most productive hounds that owe much of their recognition to PKC. Do you remember Fred Smith and Smithurst Hardrock, Mike and Mack Neal Creasy with Krackin’ Tom; Carl Carroll with Lumis and Sargent’s Blue; Ted Ramey and Milton Strain with Ole Woodpecker and John Walkup with the Plott, Buckeye Bud. Would these dogs be known to the world without the hard work of not only their owners and handlers, but also all the members who provided a quality event and level playing field for these hounds to showcase their skills. I realize that there are many more that were just as qualified and I don’t mean to disrespect them by leaving them off my list of greats, I just want to point out that most of the really great hounds of the last forty years have their roots deeply in the PKC World.

In order to provide these hounds with this opportunity to showcase their abilities, it takes a large number of people who are dedicated to the idea of a top quality event where every hound has a fair and equal chance to win regardless of how deep his owner’s pockets are. PKC began to recognize many of these people a few years ago by inducting them into a “PKC HALL OF FAME”. In recognizing those who made it possible, many things came under consideration, some were mostly recognized as handlers and they had many dollars in handler awards. Others were primarily club officers who took charge of the clubs and provided management for the club. Others were primarily known as judges, it takes a person of unusual talent to be a good judge. You not only have to be a “dog man” and know what the dogs are doing, but you have to know the rules and how to be strict and firm without being overbearing. You also have to be a person who can stay impartial; some of these ole boys can sure get your dander up and it is hard not to let that interfere with your judging when you are mad as heck at one of your handlers.

As I remember back over the last forty years, there are an unlimited number of people who flow through my mind that had a great deal of influence over our sport. Most of them did their work as a volunteer and did not have any regard for being paid. Many also conducted themselves in such a way as to bring honesty and integrity to the sport rather than any kind of personal gain for themselves. One of my greatest treasures in the sport of coonhunting is the number of people that I call friends who are part of the sport. During the last few years, we have inducted a number of these people into our Hall Of Fame. Let’s take a little time to look at the members who were inducted this past year at the 2015 PKC World Championship:

Larry Clifton of McAlester Oklahoma: When I first met Dob he was with one of my all-time heroes, Nick DeGiacomo, one of our original members and stockholders. Nick and Dob were hunting buddies, partners on dogs and made many hunts together. Dob was a good handler and followed a large number of hounds that were in the winner’s circle very often. He was also an outstanding judge, and was willing to help if we were in trouble. I believe his greatest contribution was his ability of keep a club organized and working together in harmony. I have worked with him the last few years in conducting the Blue Ribbon hunts at McAlester and it is no doubt one of the best organized clubs we go to. You can bet that they will have their judges, guides and hunting places all mapped out and ready to go when we get there. He also has an old hound (Cabo Wabo) that is a producer and I believe to be one of the best hounds of his strain that I have hunted with. Thanks Dob for your contributions and congratulations on your induction into our HALL OF FAME. 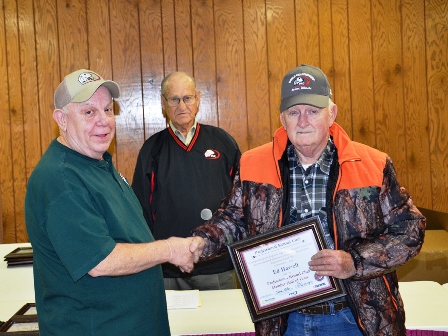 Ed Harrell of Flora, Illinois: One of the first places I can remember going to a big hunt was at Flora, Illinois, (that must have been sometime in the 60’s) and since that time, that club has been involved in producing a great many of the biggest, best hunts in the nation. Mr. Ed only lives a few miles from Charlie Brown Park and owns a spot of land that consistently brings in a winning score. I got to know Mr. Ed through his son Mike who used to terrorize the hunts with an Old Black & Tan female named Annie. Jamie Perrin of Birmingham became partners on Annie and she taught young Trey all he needed to know about coonhunting. Mike passed away at an early age, but Mr. Ed carried on for him in a great way. He is beginning to get to around 80 birthdays, but still guides a cast for us every time we are up that way. World Championship and Super Stakes and National Championship are a lot of nights in a row and Mr. Ed will be there ready for his cast every night. Thanks Mr. Ed for your contributions and congratulations on your induction into our HALL OF FAME. 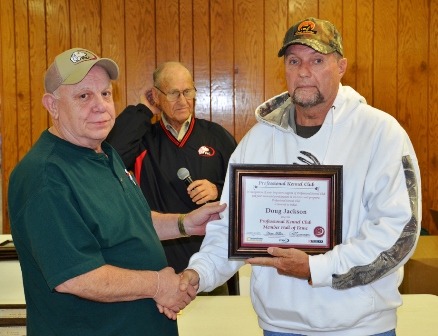 Doug Jackson of New Paris, Ohio: As we look back over the last forty years, I suppose the most memorable folks are the handlers that you knew you were going to see when you went to a hunt. Very few handlers bring back the memories and emotions of “The Jackson Brothers”, Doug and Junior. Most of us who have ever dropped a chain on a competition dog have a story to tell about Doug and Junior. Although they both did a lot of winning, most of the stories went with Junior, Doug was always considered “the good guy”. He always hunted a good hound, he knew his dog and when to call it and neither dog nor handler made many mistakes. Some of the most recognized hounds in PKC history were hunted by Doug. The last several years, Doug kind of dropped out of sight and did not make many hunts. This past year he began to make some waves again and sure enough here he is at the World Championship leading another winner. Doug has earned over $82,000.00 in awards and it sure was good to see him back with us, I am sure we will be seeing a lot more of Doug in the New Year. Thanks Doug for your contributions and congratulations on your induction into our HALL OF FAME. 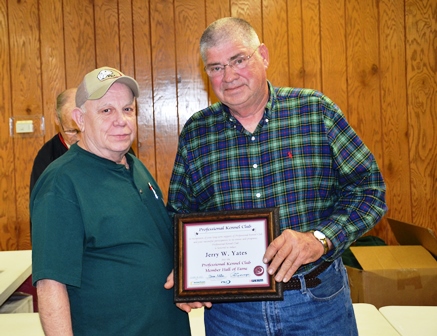 Jerry Yates of Princeton, Kentucky: For around the last 25 years, West Kentucky has been home to most of the major PKC events, Breeders Showcase, Futurity, Super Stakes, World Championship and National Championship. Whether Mayfield; Murray; Paducah; or Aurora, this has been the center of our world and most of our members got comfortable there. They knew where they were going to stay, where they would eat and many times where they would hunt. Also for a large part of our history this is where a great concentration of our best judges and handlers lived and hunted. Jerry lived in this area and hunted quite a bit a few years ago. He had an old Walker hound named Spot that was first of all a number one pleasure coon dog. I don’t think I ever remember seeing him outside the West Kentucky area, but he sure did a lot of winning around there. When Ole Spot began to carry too many birthdays, Jerry became one of the best judges we ever put on a cast. Many of the big hunts, Jerry would be our primary judge all way through to the finals. I think personality was his greatest asset, no matter what the problem was, he was always smiling and in a good mood and would handle it with everyone happy. Sure wish we had many like him to draw from now when we are looking for judges. Thanks Jerry for your contributions and congratulations on your induction into our HALL OF FAME. 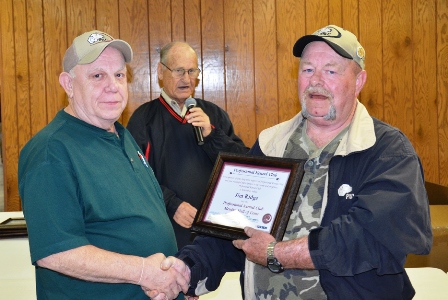 Jim Ridge of Lewis, IN: I am known to most of the world as a Black & Tan man, but it is not known that to begin with I was very partial to an English hound. I still get a little pumped when I see a good looking English hound standing in the winner’s circles. Jim Ridge is the man behind the “Brier Creek” strain of English hounds for a long time. I have owned a few of them myself and have watched as that strain has won consistently in all kinds of coonhound competition. Jim is also one of the people who make the Spring Super Stakes happen, I don’t remember just how long we have been in Sullivan, Indiana but it is several years. Jim has always been one of the first on the grounds every day and the last to leave. He and Mike Gilbert have always worked to get our guides lined up every night and I don’t think we ever came up short. Thanks Jim for your contributions and congratulations on your induction into our HALL OF FAME.

Without the work these people do, there could not be any major PKC events, we owe a heavy debt of gratitude to these members.

Congratulations to all of the inductees.
GET DEEP AND LONELY...........TWO LOOKIN DOWN'LL BEAT THE WOODMONSTERS EVERY TIME!!!!!!!!!!!
Top

Congrats Dob and the rest. We all really appreciate you guys and all you do for the coonhuntin world.
Birch Creek Kennels
Top